The Tsubaki (椿 Camellia) are fictional weapons in the 2007 video game No More Heroes and likely the 2010 video game No More Heroes: Desperate Struggle. They are a series of beam katanas are designed by Dr. Naomi for Travis Touchdown's exclusive use. The beam katana itself is based on the Japanese genus of camellia, which is a red and white color. The Power Up Parts and Energy Saving Parts stocked by Naomi are also only compatible with models of the Tsubaki series.

The first model, the Tsubaki prototype, provides better durability than that of the Blood Berry, a beam katana this prototype is most comparable to in several ways involving structural design (both models make use of an extractable frame and receiver headed by a pointed blade attachment). One notable difference between these two models is that the Tsubaki prototype does not feature a guide bar. Once designed, Dr. Naomi sells the Tsubaki for LB$98,000.

The Tsubaki Mk-II (椿Mk-Ⅱ) is largely more complete than its predecessor, but is still referred to on occasion as "a prototype." Naomi designs the Mk-II based on the US Military Secret plans Travis obtains after his ranking match against Holly Summers. Debatably the most distinguishable model of the Tsubaki line, the extractable frame now contains five emitters and receivers which rotate simultaneously; and the model requires more strength to wield, exemplified in that Travis must use two hands to wield such a weapon. The Tsubaki Mk-II is also one of the most powerful beam katanas ever produced, superior in strength even to its successor, the Tsubaki Mk-III. Once designed, Dr. Naomi sells the Tsubaki Mk-II for LB$148,000.

The Tsubaki Mk-III (椿Mk-Ⅲ) is the completed Tsubaki beam katana model. Its design is based on that of the D.O.S., the beam katana used by Travis' mentor Thunder Ryu, acquired by Travis following the death of Thunder Ryu. Unlike its predecessors, the Mk-III does not feature an extractable frame and is one of the only recognized beam katanas to emit properly without a receiver, another being the Cross Sword. An elaborate design of the kanji used to represent "Tiger" (tora) is used as the guard of the Mk-III's hilt. While not as powerful as the Tsubaki Mk-II, the finished model is the only standard beam katana that, with the proper motherboard attachment, operates at maximum energy efficiency and does not ever have to be recharged. However, while not as strong per hit as the Tsubaki Mk-II, it is faster and therefore has a greater damage per second (DPS). Once designed, Dr. Naomi sells the Tsubaki Mk-III for LB$498,000.

The Tsubaki Mk-III reappears in No More Heroes 2: Desperate Struggle, properly translated as "Camellia Mk. III". It does not have the same power as it did in the first No More Heroes, but it is still quite fast. The Tsubaki MK-I and MK-II do not reappear, though they are likely sitting in the drawer under Travis’ bed unused for some reason.

In the Trading Card Game[]

There are a number of trading cards featuring the Tsubaki models in the Design Materials set. These include "TSUBAKI", "TSUBAKI Mk-II" and "TSUBAKI Mk-III". Several cards in the set also feature Travis Touchdown wielding the first prototype Tsubaki as well. 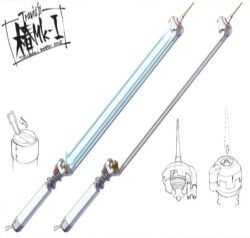 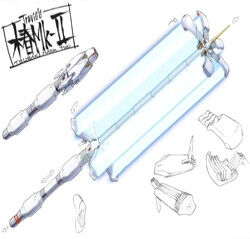 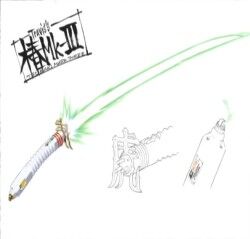