This article is a stub. You can help No More Heroes Wiki by expanding it.
This article features Unreleased Content and is subject to change. Also, beware of spoilers!

No More Heroes III is an upcoming action-adventure hack and slash video game developed and published by Grasshopper Manufacture for the Nintendo Switch. It is the fourth installment in the franchise and the third numbered entry in the mainline No More Heroes series. Following an 11-year hiatus since the last numbered entry, the game follows Travis Touchdown's return to Santa Destroy, as he must defend Earth from a very powerful army of alien invaders led by an intergalactic overlord prince.

The game is scheduled for a worldwide release on August 27, 2021.

Travis Touchdown returns to Santa Destroy after a ten-year absence. There he finds a huge artificial island metropolis floating in the sea, and a mysterious flying object hovering high above. What kind of crazy dangerous assassins will Travis face off against this time?![1]

Eight years before the start of the series, a young boy named Damon Riccitiello goes to launch his rocket in the air at night after a failed attempt when he sees something crash into the woods and encounters an injured small alien named FU. Damon decides to take care of FU while hiding him from government agents who are also searching for him. While searching for a way to return FU to its planet, Damon and FU become best friends, forming a strong connection. After discovering a piece of alien technology at FU's crash site, Damon is imbued with alien powers and assists FU in building a space ship. They say goodbye to each other, with FU promising to return in 20 years. FU finally goes home just as government agents attempt to capture him.

Twenty years later (nine years after the events of No More Heroes 2 and two years after the events of Travis Strikes Again), an adult Damon is now the CEO of Utopinia — an urban renewal company — utilizing FU's alien technology to become a powerful business magnate. A huge space ship shaped like a pyramid appears below the ship Damon is on, and a group of nine aliens descends from it, one of them revealing to be FU. Awaiting a happy reunion, FU, now in a more humanoid adult form and is now a prince, returns introducing the eight other aliens as his friends who he met in the Blackhole Prison where he was exiled to for annihilating a neighboring planet and revealing to Damon that he intends on conquering the Earth with Damon's help, much to Damon's horror. FU and his cohorts decide they will utilize superheroism as their means of world domination. Former top-ranked assassin in the UAA Travis Touchdown returns to Santa Destroy from his self-imposed exile. Learning of the situation, he must face off against and defeat this legion of super-powered beings from outer space who pose as superheroes to "save" the world.

In June 2019, No More Heroes III was announced at E3 2019 in the E3 Nintendo Direct with a 50-second teaser. [2] The game was revealed to be made in the Unreal Engine 4, the same as Travis Strikes Again: No More Heroes and it was to be a Nintendo Switch Exclusive.

Three pieces of concept art was released later that month: a desolate Motel "NO MORE HEROES", a lavish hallway and the alien space ship.[3]

As of November 2019, the game was estimated to be 35-45% complete. In detailing the open world, Suda emphasized that the size of the open world would be modest compared to productions by larger scale studios such as Ubisoft and Rockstar Games, though he also confirmed that while the game's budget isn't the biggest a Grasshopper Manufacture game has had, it is the biggest No More Heroes game in terms of scope and design. While minigames were confirmed to return, Suda expressed intentions of providing extra side activities that would be something "greater [and] different than your standard minigame." Compared to Travis Strikes Again: No More Heroes which was largely designed around Suda wishing to commemorate indie games and Grasshopper Manufacture's history, the development team designed No More Heroes III heavily around fan feedback and what they believe fans look for in a No More Heroes game.

In December 2019, it received a new trailer and extended, uncensored version at the Game Awards pre-show. However, it was jokingly revealed as a game titled 'Goddamn Superhero' focalised through the two primary antagonists.[5] Shortly afterward, the extended cut received some backlash for allegedly plagiarizing an animation effect, the matter was officially settled shortly afterward.[6]

In January 2020, Suda did an interview with online journal 'Shacknews' stating: "Short answer is that [Suda] is going to experiment lot [..] With the script he has done, he has experimented with a lot of new things and everyone else is working hard to try and add something new to the formula...".[7]

On the 30th January, they are hosting a 5 ho-r live-stream in collaboration with Dommune with new information and music to be revealed. [8] They released the first soundtrack: a boss theme titled "DEAD ORCA FORCE". [9]

The planned release was initially 2020, possibly Q2 or Q3 based on the release schedule Nintendo released in January 2020. However, on September 9, 2020, Goichi Suda announced that the game has been delayed to 2021 due to the COVID-19 pandemic. Darick Robertson, the famed illustrator that is best known for comics such as The Boys and Transmetropolitan, will be providing illustrations to promote the game.

No More Heroes III headlined the Nintendo Direct Mini Partners Showcase on October 28, 2020, which showed off an unobscured representation of gameplay, as well as confirming the return of Badman from Travis Strikes Again: No More Heroes, and Shinobu Jacobs. The trailer was followed by the announcement of ports of No More Heroes and No More Heroes 2: Desperate Struggle that would release the same day for the Nintendo Switch.

The soundtrack of the game is written and produced by Nobuaki Kaneko, drummer of Japanese alternative metal band Rize. While having had experience composing music for film before, No More Heroes III is his first time making music for a video game, and described the experience as requiring a different mindset, having to emphasize consistent tension and making sure tracks can loop. The process would involve sending Suda a variety of different tracks, and letting him decide if they are suited for any of the game's specific moments. The experience making music for the game inspired Kaneko to create his own band; Red Orca. The band's debut single "Orca Force", which released October 2019, was originally made for No More Heroes III, and an alternate version of the track called "Dead Orca Force" is featured in the game as a boss track. Kazuhiro Abo, lead composer of Travis Strikes Again: No More Heroes, is also providing additional music contributions for the game.

Travis' reveal in the first trailer 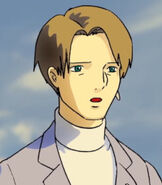 Damon Riccitiello in "The Return" trailer

The reveal of FU's friends in "The Return" trailer, top leaders in the invading alien forces, and secondary antagonists and bosses in the game

FU and his buddies, the top brass of the alien army and the main bosses in the game.
Add a photo to this gallery

Retrieved from "https://nomoreheroes.fandom.com/wiki/No_More_Heroes_III?oldid=9519"
Community content is available under CC-BY-SA unless otherwise noted.